My oldest brother got married this past weekend, and for the first time since our father’s passing my four older siblings and I were in the same place.  It’s always a bit strange seeing us together, because the time that passes in between such events is always significantly long enough for a few big changes to have happened for some (if not all) of us.

Hindsight convinces me time and time again that, had we been raised by different parents, after a certain point we might have never spoken to one another again.  All of us have always had big personalities, and while we were growing up those personalities sometimes caused family time to descend into emotional anarchy.

Yet here we are – all of us finally in our adult lives, filling out those personalities with maturity and respect for one another.  I have to point out that our sisters, being several years older than my brothers and I, made it to this point ages ago while we three younger siblings were still figuring out the basics.  But now that we have all been living in the grown-up world for several years and making our separate ways through it, perceptions have changed, and we can now see each other for who we really are and appreciate more the traits in each other that we previously took for granted.  And not only that – we have also come to see facets of our personalities that we never noticed before, both in each other and ourselves.

The night of the rehearsal dinner, the five of us recreated the sibling portrait that was photographed twenty years ago.  Looking at the two photos side by side, it makes me laugh and warms my heart each time.  We’re definitely all different, but in little ways we’re all the same.  The original photo captured those big personalities in our younger selves, and the recreation captured those same personalities expressed and handled by more mature and grown-up people.

If there is one thing that I took away from this whirlwind wedding weekend, it was the utmost importance of my siblings and the presence of each one of them in my life.

These are the first minds that taught me how to see the world from different perspectives and to think for myself.  These are the hands that slap sense to me as well as soothe my wounds. These are the hearts that love me even when I am not the least bit likable; the arms that catch me when I fall; the voices that answer late-night, cross-country phone calls.  These are the smiles that brighten up every room and the wits that brighten every conversation.

We might not always like each other, but we do always love each other.  And I know that I can count on my siblings to be there for me and to stand with me on the day when it will be my turn to bring a new brother into their hearts, and that they will help be bring a new son into our mother’s. 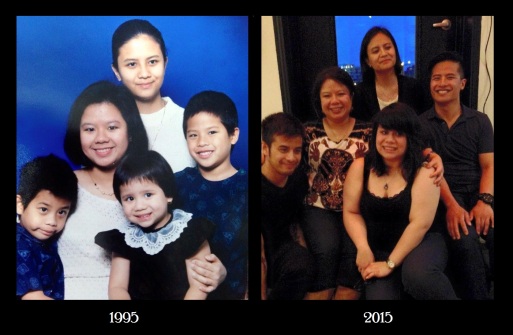 New people in your life get you thinking about yourself.  They put a new light on your story when they tell you theirs and ask you questions about where you come from and why you are the way you are.

Sometimes, these new people bring other new people – like their parents – into your life, and then all the stage lights blind you as you question yourself and your origins even further.

Today, I found myself reflecting quite a bit on my childhood, which was spent in a sleepy little town in the Fraser Valley. Surrounded by the greenness of mountains and hills, my two brothers and I grew up rough-and-tumble, and we grew up together.  I know it’s odd to emphasise togetherness when talking about siblings – I mean, those of us who fall into some kind of birth order all grow up with their siblings, right?  But there’s growing up with siblings, and then there’s growing up together.

My parents had an approach to childrearing that, in true form to the immigrant experience, fused the old world with the new – as well as East with West.  In this particular fusion, my parents drew upon Confucius and Sun Tzu, the Bible and Baltimore Catechism, and even Dumas and the French Revolution to create their particular brand of parenting.  Confucius and Sun Tzu are simple enough to explain – although we’re pretty Western, we are indeed quite Asian.  As for the Bible and Baltimore Catechism – we’re Catholic, ‘nuff said.  And in case you’re wondering what the French have to do with the upbringing of Filipino children, the principle of “all for one and one for all” often came into play, particularly when disciplinary measures had to be taken, whereas “liberté, égalité, et fraternité” emphasised this idea of oneness during times of peace.

In retrospect, the extent to which the first of those ideals of the French Revolution applied to us is still highly debatable.  For example, we went through the gauntlet of public school, but every year come June my brothers and I were not free to enjoy the leisurely, idle lifestyle that reduced most of our peers to a curiously vegetative state of intellect. My father and mother put us through a rigorous regime of classical education during the summer, and in between child-friendly lessons in Latin, grammar, history, and Catechism we even had physical education.  In layman’s terms, that last bit can be translated as “landscaping our gardens,” because while the household budget could cover materials, it fell short of covering labour (and my parents were also of the opinion that no amount of money can build strong character in strong bodies).

Sibling oneness…sibling togetherness.  Goodness gracious, great balls of fire —  did we ever have that.  Our protests fell upon deaf ears whenever we, an apparent power trio of youthfulness and intelligence, were reminded that we were a three-for-one deal.

Something vaguely resembling democracy amongst the three of us was how we ended up in jiu jitsu together in primary school.  Alas, the sweet days of the quasi-democracy came to an end, and soon we were run by a dictatorship of instincts:  if one of us became interested in something, the other two would also eventually get sucked into the new and exciting world of “whatever-it-is-this-week.”

This is how I ended up in Accelerated Principles of Mathematics and Late French Immersion.  This is how my oldest brother ended up playing guitar after I brought one home from school, and how the other one got suckered into buying a guitar of his own eventually (our quasi-democracy resurfaced briefly during this phase, and that’s how I ended up playing bass – we had a lead guitarist and a rhythm guitarist, and unless you’re Iron Maiden you can’t get away with a third wheel on the six-string).  This is how I ended up listening to heavy metal and dressing like something from a Circle of Hell (or Scandinavia, as some people might call it).  This is how we all ended up working for the same technology retailer.  This is how we can all say we’ve filled out application forms for the DND.

This is how…well, you get the point:  this is how I came to be the way I am today.

I have often said that while I do love my brothers all the time, I don’t always like them.  But after a certain New Person In My Life brought along a whole bunch of Other New People, I started looking back on the Old People In My Life and All The Things That Happened.  Then I realised something:  my brothers were always there.  “It was the best of times, it was the worst of times” – but regardless of the time of my life, my brothers were there for me in ways that none of my friends (not even my best friends) ever were.

When a summer fling ended up as an autumn dumping last year, I (being an attention-seeking youngest child and egoistic Leo) opened up FaceBook looking for a sympathetic someone to lean on.  It’s rare that I ever catch both of my brothers in the same place these days, but in times of great distress the two of them are always around for me to lean on – and this was no exception.

My brothers were there for me, just as they’ve always been.  But this time, they weren’t boys who were obligated out of filial piety to defend their little sister (who could have probably just sat on most of the bullies anyway).  This time, they were young men who knew enough of the world to tell me what I needed to hear the most (and more so than what I wanted to hear), and who did just that simply because they love me.

And I love them.  I like them now, too, and that’s because I’ve grown up enough to know that while I’ve got two big brothers, they’ve only got one little sister.  Obviously I haven’t grown up quite enough to remember all the time that I’m not the centre of everyone’s world.  But I know now that I have a place in my brothers’ worlds because they want me to be there.  And that’s cool with me.